Today’s Portuguese class was very small as none of the other girls could come. So Marcia (our professora) and I got in her car and drove to the venue for today’s class; the home of local artist Leôncio.

We were greeted by Leôncio himself but also his two dogs Bu (whom I convinced Leôncio and his wife to call Bosse) and Bebê. Both dogs are very sweet but ill-mannered and totally oblivious of their size and weight as they jumped on us. For once I had taken a shower and changed from my workout. I was wearing a light grey coat and crispy white sneakers. Both now had giant red paw prints all over the place… Not a thought through outfit. 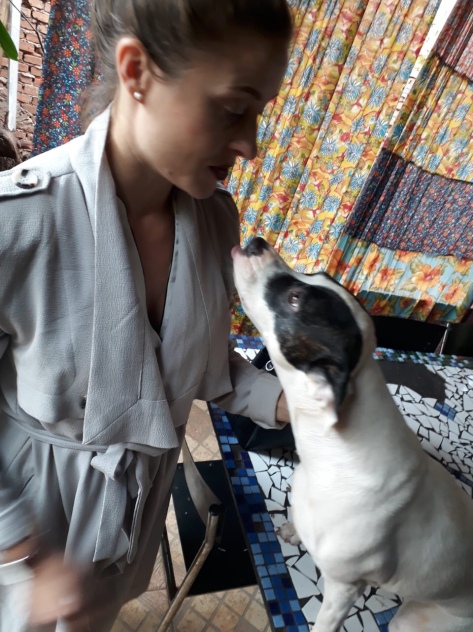 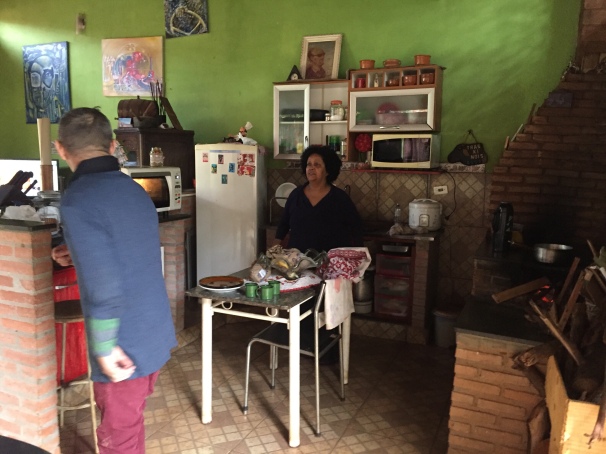 We entered the house straight to the kitchen which had a wood burning stove with a pile of wooden debris next to it. Goreti, Leôncio’s wife was in the kitchen making “pão de queijo” which are little balls of cheesebread. A national food in Brazil.

Leôncio and Goreti met back in the 80s. They met briefly and when he saw her the second time she was pregnant with his child. They got married and have stayed married for 41 years. They have 2 children, 3 grandchildren and 2 GREAT grandchildren! Not many 60 year olds in Sweden have great grandchildren. Most have just become grandparents at that age. Here it is more common. They have kids early perhaps mostly by accident and because abortion is illegal in Brazil.

While the pão de queijo was baking Leôncio showed us some of his work. He showed us a cool piece of an apartment building which was painted on several segments. It had lots of details and was fun to look at. He has also done many landscapes of Rua 5 which is one of the oldest streets in Araraquara and also the location of my favorite restaurant “Água Doce”.

A whiff of pao de queijo right out of the oven beckoned us to the table which was itself a beautiful piece of mosaic art made by Goreti. We talked over coffee and I quickly filled my notepad with new vocabulary. Most of it was slang which is very useful. “Boca moca” is a new favorite and refers to something messy, crazy, screwed up.

After coffee we began our arts class. Leôncio had us sketching a glass bottle over and over again only giving us 10 seconds each time. We got to know the bottles shape that way. After that we were given 10 min to complete the sketch including the reflections in the glass.

Time ran away from us as it always does during our classes and after we said obrigada and tchau to Leôncio and Goreti and immediately scheduled a part II with Leôncio. Before we left he quickly sketched my portrait on his phone. Legal! (Cool!)

After picking up the kids I drove to the dry cleaners and dropped off my coat and shoes which were a total boca moca.

2 thoughts on “Artsy Portuguese Part I”

This is a text widget. The Text Widget allows you to add text or HTML to your sidebar. You can use a text widget to display text, links, images, HTML, or a combination of these. Edit them in the Widget section of the Customizer.
Follow CarosCarnival on WordPress.com
Loading Comments...
%d bloggers like this: